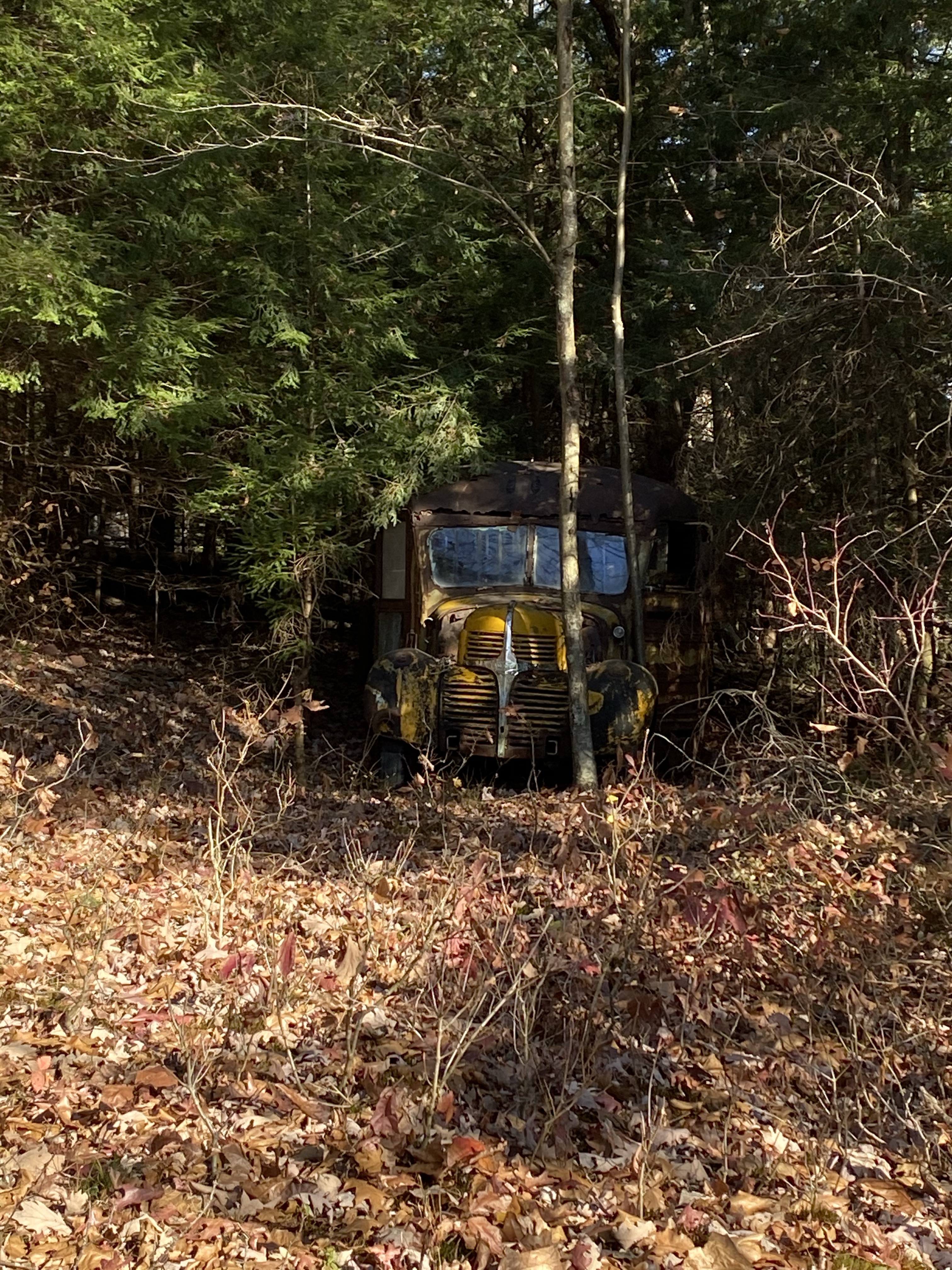 How has it been more than 3 years since I’ve written a blog post? Oh! I know! We’ve had a global pandemic, renovated a 4 bedroom farmhouse in Weedville that was originally built in 1864 (with a random school bus abandoned in the woods), and built a new 2 bedroom cabin in Benezette (that we meant to build in 2020). We met a really cool race car driver and started sponsoring a race car, and then, we spent two busy Rut seasons running 3 cabins by ourselves! Right. That’s kept us busy!

We have been so blessed to have guests that have stayed with us through all of that excitement. I’ve been surprised to hear that a lot of you have read all of the blog posts (Deb W, Tim F, Andy L, Dad, Edgar, I’m looking at you [and, thanks for reading!]) and want to hear more about the adventures of remodeling an old house, and building a new one with supply chain issues. While some of it I’d rather forget (carpeted bathrooms and 20 week lead times for doors and windows), it’s all turned out great (at least we think so based on our returning guests!).

Over the next few months, I’ll be blogging about these projects to give you a behind the scenes look at just how glamorous building, renovating and renting vacation cabins can be. I hope you’ll enjoy our stories as much as you enjoy our cabins and as much as we enjoy hearing your stories when you rent an In The Sticks Cabins cabin. 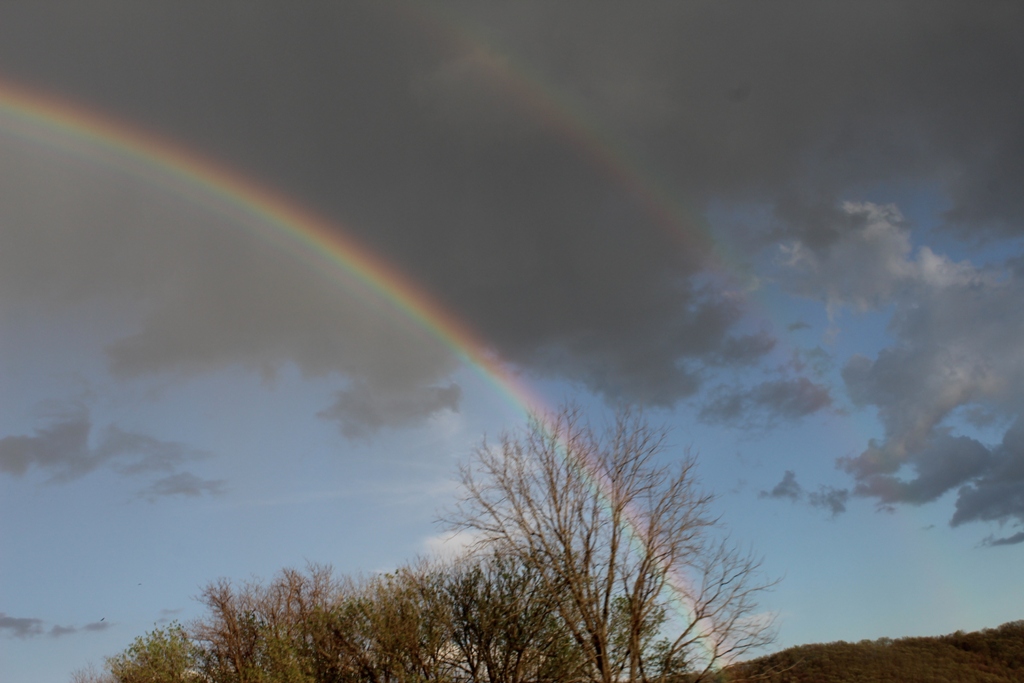 Spring has sprung in Benezette and our cabin will be ready to rent soon!

It was recently brought to my attention that our marketing department (yeah, that’s me. sigh.) has been slacking on keeping you updated on our sweet Benezette cabin progress!

Some of the progress we’ve made is unsexy, so to speak. For example, the husband installed the water pump system and hot water heater. It’s a couple metal cylinders jammed in a closet. I didn’t think that’d be the kind of thing you were into.

There have been some AWESOME things though! The trim looks incredible, the bathroom title is amazing. The kitchen is ready for appliances and the counters look great and were easy to install. Check it out!

I haven’t gotten any great elk photos lately, but they’ve been around the neighborhood quite a bit. I was digging through the camera and found a few photos from March that I didn’t get to share with you (seriously, I don’t know where March went. It’s almost May!)

We’ve seen a lot of birds, including turkey and a woodpecker! The apple trees are starting to blossom too! We’re picking up 6 more trees tomorrow, so they’ll be planted this weekend! 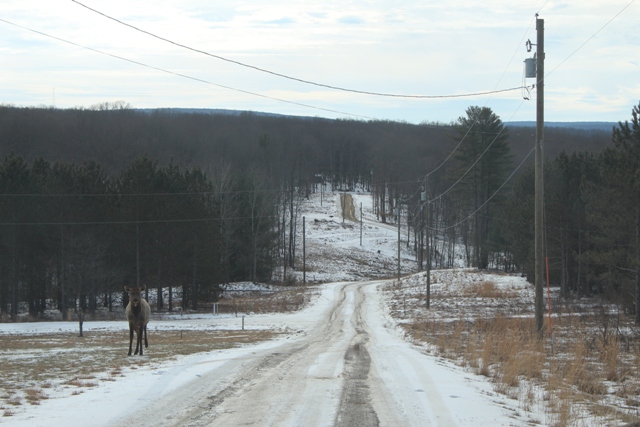 Hey you guys! Did you miss me? I missed you too! The past few weekends have seen some very busy days in our Benezette cabin, The Sapling! I’m thinking pretty soon, she’ll be ready for renting!

In addition to lots of progress, Mother Nature has been hard on Western Pennsylvania with weather this year! With lows in the negative numbers and then a few days of highs in the 60s, you never know what you’re going to get! Our last trip to the spring was an icy mess!

So, since we last spoke we’ve moved on to projects that seem to be going much more quickly than the past few weeks. The main living space and bedrooms are getting wood floors installed and we found tile that looks like wood planks for in the bathroom. The husband has gotten the wood up on the lower quarter of the walls.

He’s also gotten some of the interior doors and framing installed. I am so happy with how the doors turned out. Shout out to my sister for her patience in helping get a satin smooth finish on these months ago!

Lastly, we’ve (read: the husband) started placing the cabinets and installing the lighting in the kitchen!

And, since I know you really only come for the elk updates, let me tell you this. They are back in the neighborhood in force! I’ve seen them every day for the past few weeks! Enjoy these photos until next time! 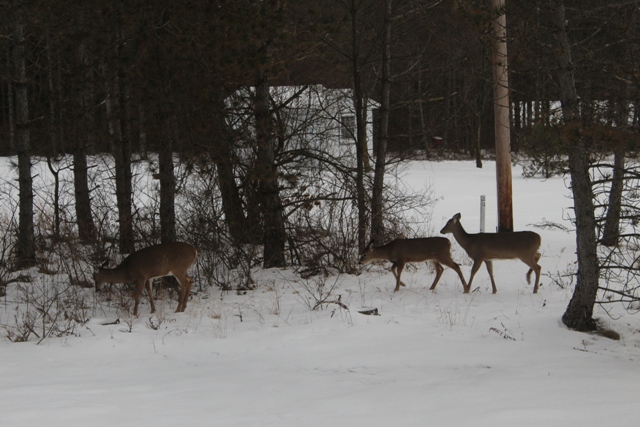 Due to the snow and ice from last weekend, the husband did not have Friday off and we got to head to Benezette together on Friday night. We got a late start, and when we got in at 11 that night, it was only 32 degrees in the camper. BRRRRR. It was 9 outside, so, I guess 32 wasn’t so bad. The forecast called for more snow on Saturday night.

On Saturday morning, the ground was a sheet of ice, covered in a half inch of snow, covered by a thin layer of ice. Slippery, but it looked beautiful! We drove through town on our way to get water from the spring, but there were no elk to be found. As we headed back up Winslow Hill, I looked out over the field at the Winslow Hill Viewing Area and I found ALL of the elk!

The weather men got it right, because Saturday night the snow moved in and stuck around until well after lunch on Sunday. The husband estimates there was about 4 inches of snow by the time it was all said and done. We very carefully trekked up to the cabin to finish the painting while the wind whipped the snow around us.

I was not in charge of cutting in the wall paint in the living room and kitchen area (Hallelujah!). The paint that we’re using is great, it goes on smooth and dries quickly, so we were able to get two coats done! That meant it was time to finally put some of that stained wood up on the walls! It. Looks. AMA. ZING.

Turns out I owe you some pictures from last week too. The bathroom is painted, and some of the electrical devices are in. Plus, the husband started to trim out the windows!

With the polar vortex settling in, the forecast in Benezette is saying wind chills will be between -20 and -35 on Wednesday and Thursday. Hope it’s warmer where you are!

This weekend they were calling for QUITE a bit of snow in Benezette. In fact, our special guest this week, the MIL, almost didn’t come because she was afraid we’d get snowed in! That said – come heck or 18″ of snow – I would be putting paint on the walls in this cabin!

We’d already painted the ceilings in both bedrooms and the bathroom had primer on the walls and a coat of white on the ceiling (thank you husband). So the MIL and I just had some walls to slap paint on. I woke up early on Saturday and the MIL had discovered a herd of elk next door. Outside, in my jammies, with no coffee, I went.

After I got some coffee, breakfast and not plaid, flannel pants on – I headed back outside. The elk were still there! I don’t think I spooked them, but I did slip and yell and roughly about the same time, they all took off in the opposite direction.

The MIL volunteered to cut in the wall color, and I was super glad for that. Patience, not my thing. But as luck would have it, she was too short even standing on the work platform. Turns out, patience AND cutting in paint with no tape are not my thing. I got better as the coats went on, but the husband did a good bit of cleaning up after me.

The paint dried pretty quickly so we were able to get two coats finished in the bedrooms as the snow really started to fall Saturday evening. The walk back to the camper, in the dark, with the fresh, beautiful, shimmery (slippery, cold, dangerous) snow was treacherous. The MIL let me lead the way, since I (theoretically) know the ground the best. She was wrong. I fell twice (so, on second thought, I suppose she was right to let me lead).

On Sunday, we woke up to a beautiful, winter wonderland. But I assure you, there was NOT 18″ of snow. I was sad. I like snow. It was still super pretty, and also, super cold. I think the high was 20. The temperature dropped throughout the day. Luckily, it’s warm in the cabin! The husband tackled electrical devices in the bedrooms while I painted the bathroom.